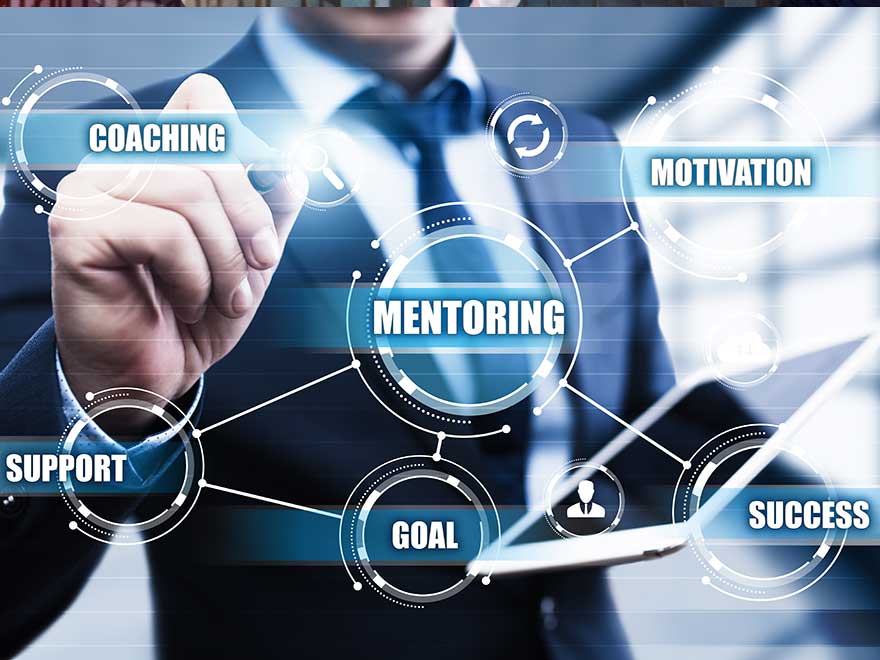 For many entrepreneurs and small business owners, maintaining relationships with mentors can make the difference between success and failure. In fact, contrary to popular belief, when it comes to truly stellar business accomplishments, many of these wunderkinds who regularly dominate the news were actually “standing on the shoulders of giants.”
Hard to believe? Well, the truth is that very few of us were able to go it alone from the very beginning. Most had someone there in the early days, someone with real-world experience to show them the ropes, to provide encouragement, and to make sure they didn’t fall prey to common mistakes.

Standing behind even the most famous business innovators of our time, one can usually discover a lifelong mentor. Let’s take Mark Zuckerberg, the founder of Facebook. He had specifically described none other than Steve Jobs as providing him direction when times were tough. Apparently, Jobs encouraged the young social media icon to stay true to his original vision and build the highly successful team that has proved so successful over the years. Mark Zuckerberg has also enjoyed the mentorship of many other personalities within the IT world and has credited much of his success to these relationships.

Even Warren Buffett, one of the globe’s most successful and savvy investors had the benefit of mentorship. His mentors’ name was Benjamin Graham, and he was the author of a book describing the best strategies for investing. Buffett attributes reading this book with spring-boarding his career and encouraging him to enroll in Columbia Business College.
Many may recognize the world-famous real estate investment book entitled Rich Dad, Poor Dad. Its author, Robert Kiyosaki, related that a considerable portion of his business success was directly attributable to his ‘Rich Dad’ mentor, who encouraged him to actually adopt the traits of an investor, rather than an employee. This mentor taught him the benefits of purchasing income-producing assets that would later lay the foundation for Kiyosaki’s media and real-estate empire.

It may seem far-fetched, but mentorship can sometimes even develop between business competitors. Though their companies are currently in direct competition with one another, Marc Benioff, current president of Salesforce still regards Oracle Founder Larry Ellison, as a mentor. In fact, an entire chapter of Benioff’s book Behind the Cloud is dedicated to the many lessons he learned while working as an executive under Ellison.

So it’s readily apparent that mentorship has played a huge and vital role in the success of these industry pioneers. It’s fair to say that you, yourself could also do with some mentorship as you fine-tune your ideal business. Here are five, firsthand tips straight out of the horse’s mouth to propel your business into the stratosphere.

1. Mentors Can Assist with Refining your Ideal Business.

Sometimes, it’s that little extra push to get an idea moving. Shireen Jaffer of career coaching firm Skillify related that it was an actually a high school instructor who encouraged her to enroll in USC’s young entrepreneur program initially. During the program, Jaffer was giving a presentation during which she inadvertently pitched a business idea. One professor who was attending the presentation later invited her to his office to discuss the proposal in greater detail. Two months later she launched her idea!

In Jaffer’s case, she had no entrepreneurial connections in her family, so she was left bereft when it came to business guidance. It was a series of instructors and professors who served the function of mentors in her life, and this later proved crucial to her ultimate success.

2. Mentors Are the Key to Learning New Skills

Anyone who learns a new skill or trade will have to initially serve for a period of time as an ‘apprentice.’ This means working beneath an experienced or ‘master’ tradesman. If you’re inclined to develop your skills in a specific field or trade, it’s considered a right-of-passage. Many people regard this arrangement as only applicable to carpenters, welders, or other service-type technicians. The reality is that apprenticeship is actually required far more broadly and can apply to almost any career path.

Don Barlow, the owner of Finyl Vinyl, expanded on this idea of mentorship offering advantages when entering a career path.

3. Mentors Can Reign You In, Knowingly or Unknowingly

Our mentors can be fantastic examples of how to conduct ourselves as we execute our most significant business vision, but they can also be incredible examples of how NOT to perform. If a highly experienced colleague in the same industry gives you caution-either personally, or for example, it may be of benefit to pay close attention. The old saying still goes: Learn from other’s mistakes.

Jeff Hensel of North Coast Financial reports that while working as his father’s understudy in the private lending business, he learned a tremendous amount not only through his father’s successes but also through his mistakes. The result? Future time and money savings.

Hensel added that being able to observe the mistakes of someone else, is far more comfortable than making those mistakes yourself, and suffering the consequences later.

4. Mentors Are the Key to Networking

Once you discover a solid mentor who is fully invested in your success, they can also be invaluable resources when it comes to building contacts. In fact, health and wellness advisor Amy Backlock of Life Zemplified related that in her case, mentors created multiple valuable connections and contacts within her industry.

Backlock recognized that her mentor was absolutely crucial when it came to beginning her own personal training business. Years ago, when he opened his private training studio, his mentor was a successful doctor of physical therapy who owned many rehabilitation centers. He ended up creating a virtual explosion of connections that ultimately helped to thrust her business into the forefront of the industry.

Having a well-connected mentor in a closely related industry helped to build a solid foundation during her early forays into entrepreneurship. He stated that having a source of endless information, important contacts, and someone to listen, it contributed to his success.

Many people have a fixed idea of who a mentor will be. They picture some older person who has paid all their dues and who now knows everything there is to know about the industry. This couldn’t be further from the truth. Real life isn’t the Shawshank Redemption.

As demonstrated by many of our former examples, right mentors can come in many shapes and sizes. They can be former bosses turned competitors, colleagues, children, your spouse or even your local barista. In fact, anyone who is able to demonstrate a novel idea, or spark of encouragement can be considered a mentor. Don’t let preconceptions interfere when it comes to finding mentors.

Ms. Deborah Sweeney, owner and operator of My Corporation, which she leveraged out of its parent corporation Intuit, reports that she has had many mentors who taught her a variety of lessons. She says that her mentors included her mom, female professors, and work colleague mentors.

Mentorship can be that secret ingredient or that final catalyst needed for personal growth. When searching out a mentor, it can be of benefit to not get caught up in traditional avenues. It can often pay to search out nontraditional sources for growth and encouragement. The internet can be a fantastic resource if you are scarce on personal connections or time. You might not be able to cozy up next to Elon Musk, George Soros or Hillary Clinton, but you can always watch interviews, read books, visit Pinterest or review youtube videos that are almost just as good. Any way you choose to seek out mentorship, it can only help improve your business outlook.